Well its been a busy few weeks here at Ceomara, with the schools on holiday there are lots more people about.  The cottages have been full since May and the first vacancy we have is at the end of August.

Tom has been away a lot skippering ‘Damsis’ which has had an active season so far. We have run a number of RYA courses on her over the past few months and quite a few skippered charters, working with our partners Spirit of June Yacht Charters and Training. The most recent was a trip using the boat to access some of Scotland’s more remote peaks with some bird watching thrown in.  Needless to say on their return the guests were loaded up with Ceomara Cottage brochures; we look forward to seeing them  in the future, based here for some hillwalking in the splendid Torridon Mountains.

Here is an extract of a blog from his most recent trip written by Iain Wright one of the guests. (photographs courtesy of Robert Brown, Paddy Grant and Moira Hamilton) 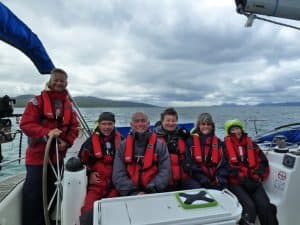 The twin objectives of the trip were: the Rum Cuillin (one-  way trip) and  “something in Knoydart”. Essential  equipment comprised: the Bavaria 44  yacht: Damsis, her  skipper: Tom Watson, backpacks, foul-weather gear,    thermal underwear and wellies.

Day 1 we joined Damsis at Badachro and loaded her up with unfeasible amounts of provisions for the week. Unfortunately, it was too windy to set sail, so we amused ourselves with eating, drinking and knot-practise.

Day 2 weather looked good, so we rose early and beat down the Sound of Raasay (avoiding NATO’s submarine torpedo test-firing range), through the Kyles of Lochalsh and (the 6 knot tide in) Rhea to Loch Hourn – where we anchored (after about 6 attempts) at Eilean a Phiobaire for the night.

Day 3 involved dense fog, so we thought that the sensible thing to do was bushwhack up a Munro (Ladhar Bheinn: Robert, Moira and Iain) and a Corbett (Beinn na Ceilidh: Paddy, Linda and Graham). Fortunately, radio contact was maintained with Tom on Damsis throughout and both parties were collected from the shoreline before being eaten by midges. A pleasant sail down the Sound of Sleat took us to a mooring at Doune, where we fed a lone-kayaker Budweiser and biscuits before sampling the excellent seafood restaurant.

Day 4 involved calling in to Mallaig for essential supplies (tonic for the Gin), before voyaging out to Eigg for hen-harrier and shearwater-viewing, followed by lunch. Then we set sail again for the circum-navigation of Eigg, porpoise-spotting and checking-out tomorrow’s planned drop-off location: Dibidil Bay on Rum.

Day 5 dawned sunny and calm, so we executed the main-feature of the trip: the Rum Cuillin. Tom manoeuvred Damsis close-enough to the tiny beach at Dibidil for Paddy to ferry us ashore in the    t

ender and Robert led Linda, Moira, Graham and Iain up Sgurr nan  Gillean (easy striding, but not much of a path). We then found a path  and  routed round Nameless Corrie to Ainshival (lots of Shearwater  burrows –  some containing chicks), down to the Beallach an Fhuarain  and back up to  Trollabhal for first lunch. Down to Bealach an Oir,  then the ascent of  Askival (second lunch, viewing a soaring Golden  Eagle) and Hallival. The final descent was a bit of a drag, but the skipper collected us from the old pier and the whole (one-way) trip took 9 hours (including three “lunches”).

Day 6 was flat calm, so we motored back up the Sound of Sleat while dining on fresh-caught mackerel before the wind re-appeared and we sailed back through the two Kyles and round to Plockton to ride-  out the forecast gales on a vill 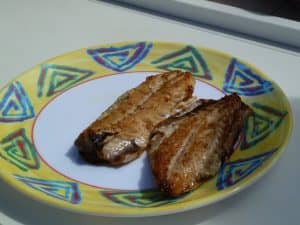 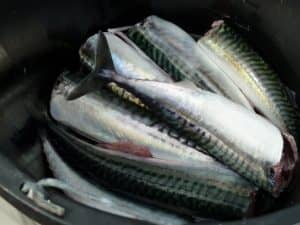 Day 7 the gales failed to live-up to Stornaway  Coastguard’s  forecast, so we set off: running  downwind in a warm force 4 past the Crowlin  Islands, whereupon the southerly gale arrived

and blew up to Force 8, so we surfed over to Acarsaid Mhor on Rona for singing seals and lunch. 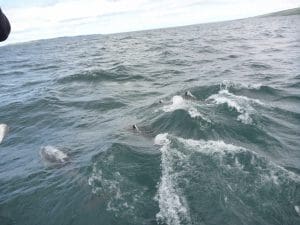 While surfing we were joined by a small pod of  dolphins  (including two really-cute calves) – who enjoyed leaping  around in our bow-wave  for ~20mins.

After lunch, the gale increased to Force 9, which tested the helmsman’s mettle, while we zoomed back to Badachro at 10 knots – arriving in plenty of time for the end-of-cruise party at the excellent Badachro Inn.

For any hill-walkers contemplating such a trip, we would highly recommend Spirit of June Charters at Badachro (close to Gairloch): especially Skipper Tom Watson and his yacht Damsis. 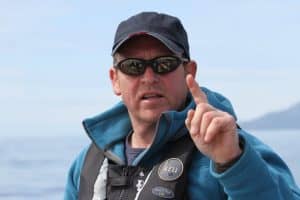